Prayers for Our President

Tears streamed down my face the Sunday after Election Day.
More tears fell on Sunday then they did on Election night when Barack Obama was elected the 44th president of the United States of America. In the predominantly African-American Baptist church that I attend, there were many tears. They were tears of joy. They were tears of celebration. We shouted and praised God for the election of our new president.
While the African American community was celebrating, I imagine that it was a more solemn scene at some other churches around the country.

I read that one priest said it was a sin to vote for Obama. I was disheartened during the campaign to read accounts of nooses with images of Obama hanging at “Christian” colleges. I was disappointed, but not surprised at the “Obama Waffles” which featured a racist cartoon of Obama that were sold at a Values Voter Summit during the campaign. I wonder what type of values these voters have that they embraced racist imagery and words so freely. I now refuse to listen to Focus on the Family and James Dobson, a program that I used to value for its biblically based advice on family issues, when I heard that on its web site Focus on the Family had asked folks to pray for it to rain on Obama’s acceptance speech at the Democratic National Convention (http://latimesblogs.latimes.com/washington/2008/08/prayer-video-th.html).
Ironically, the start of the Republican convention was disrupted by a hurricane.
While they were praying for it to rain on Obama, millions of others across the country and world were and still are praying for his success and protection. Frequently during the long campaign, I would hear black people and especially older ones in particular say, “I hope they don’t do nothing to that man.” They had seen the carnage of hatred from the assassinations of the Kennedys and King to Malcolm X. They knew folks who were good “Christians” during the day who donned white sheets at night and killed black men with impunity.
Whether you voted for him or not, there is one thing that we as Christians can agree on. We need to pray for our president. During this time of crisis on so many fronts, we need to pray for our country and all of our leaders. The Bible tells us to pray for our leaders. And with the crises facing our country, our leaders, and especially our new president, need all the prayer they can get. Barack Obama faces extraordinary challenges. For some he is a messiah. For others he is a pariah. For some he symbolizes hope. Others can only see him through the prism of racial hatred.
His actions and policies should be examined and judged as any other presidents. But I believe his actions will be more scrutinized and criticized as the first African American president. Although he didn’t make this mess, he will be expected to miraculously clean it up. He will make mistakes and we will not agree with all of his decisions. I do believe that most Americans, however, do not see Obama as a messiah, but as a man and they are not looking for him or Washington to solve all their problems. But they are looking for a leader with intelligence, compassion, moral integrity and conviction. They are looking for a change from the arrogance of the last eight years.
I pray that Barack Obama will be that leader that we so desperately need 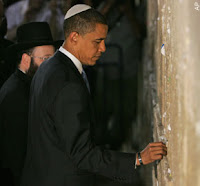 at this time.
There is an email circulating that I received that has a prayer for Obama. It says:
We pray for optimum health, mental clarity, and political prosperity for President Barack Obama.
We pray that what he lacks in political 'experience' you will make up with supernatural wisdom and power. We also pray that when his enemies come upon him, you will set up a standard against them and they will stumble and fall.
We pray that your love will fill his heart to the end that 'Your will' will be done through him.
We pray mightily for his protection. As we plead the Blood of Jesus over him and his family, we ask you to dispatch 'legions of angels' to protect them from all hurt, harm, danger, and from all accidents and incidents as he takes over as the next President of these United States.
You said in your Word that "If your people, who are called by Your name, would humble themselves and pray and seek Your face, and turn from their wicked ways, then You will hear from heaven, and will forgive their sin and heal their land." We thank and praise you for answering our sincere prayers. In the mighty, matchless name of Jesus' we pray.
AMEN
I say “Amen” to that. And I also say let’s commit ourselves to regularly praying for our president.
Maybe we can pray what Obama says that he prays for himself:
“The prayer that I tell myself every night is a fairly simple one: I ask in the name of Jesus Christ that my sins are forgiven, that my family is protected and that I am an instrument of God's will.”

What is your prayer for President Obama? Share it with the At the Well community by leaving a comment.
Posted by Monica Fountain at 2:20 PM

I continue to pray for Obama and his family as mankind around the world will benefit from his leadership and the strength and love of his family. I was at my daughter's school during the swearing in ceremony. Never have I witnessed such attentiveness from elementary schoolers. There were tears everywhere. It was a truly wonderful, historic event.--Eugenia Drye