I really empathized with Miss California in April. I know about losing a title because of one pageant question.
Many years ago, I was a contestant in the Miss Teen Kankakee pageant. I felt the crown was within my reach. That is until I came to that pesky question section.
They asked me some question about being a lawyer. "Hey," I thought. "I don’t want to be a lawyer. The other contestant, Lisa, wants to be a lawyer. That question’s not for me." 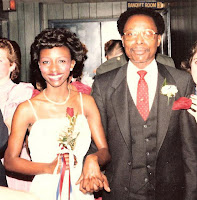 I stumbled and bumbled through an answer, totally taken off my game by the unexpected question. I ended up with the second place trophy and stayed in bed mourning the next day, until my father finally told me to get up.
That question had cost me the crown.
Miss California, Carrie Prejean, said she believed she lost the Miss USA crown when celebrity blogger judge Perez Hilton asked her if she believed same-sex marriage should be legal across the country.
“Vermont recently became the fourth state to legalize same-sex marriage,” Hilton said. “Do you think every state should follow suit, why or why not?”

Prejean, like me, also seemed to bumble a bit and be caught off guard at first before she gave the following answer:
"I think it's great Americans are able to choose one or the other," she said. "We live in a land that you can choose same-sex marriage or opposite marriage. And you know what in my country, in my family I think that I believe that a marriage should be between a man and a woman. No offense to anybody there, but that's how I was raised and that's how I think it should be, between a man and a woman."
In the end, Miss California was named the first runner up, but ended up getting more attention for that one answer than Miss “What’s Her Name” who actually won the crown.
Later, Hilton described Prejean as a dumb “b” (rhymes with itch). She has been lauded and lambasted for her answer. She has been interviewed and appeared in commercials defending traditional marriage. Photos of her posing in lingerie have been posted on the Web.
It’s strange to me that someone would be publicly derided because they state a belief that marriage is between a man and a woman. How did we come to this point? For all of human existence and in every culture that I know of, marriage has been defined as between a man and a woman. Does it now make you an oddball to say what has been the case throughout human history or that would have seemed a few years ago to be an obvious and ridiculous question?
The first amendment of the U.S. Constitution ensures American citizens certain rights, including freedom of speech and freedom of religion. Perez Hilton asked the question and Miss California gave him an answer. She expressed what she believed. By the way, her answer was the same basic answer that has been given by President Barack Obama and other politicians including California Gov. Arnold Schwarzenegger when asked about same-sex marriage.
I do not see same-sex marriage as a question of civil rights. I believe in equal rights for all citizens. An adult person of sound mind should be able to leave their property to whomever they wish. People should also be able to say who they want to make health choices for them if they are incapacitated and who they want to receive benefits from their death.
But I also believe in the Bible. I believe that God’s Word and his law supersede man’s law. And I believe, like Miss California, and many others, that marriage is between a man and a woman. And that marriage is not a civil rights issue but an institution ordained by God. It always has been and it always will be.
Man may change his laws. The California Supreme Court recently upheld Proposition 8 which defines marriage as between a man and a woman. One day, that may not be the case in this country. Man may redefine marriage. But whatever man may say, what God says will remain and be true-- yesterday, today and forever.
"And the rib, which the LORD God had taken from man, made he a woman, and brought her unto the man. And Adam said, This is now bone of my bones, and flesh of my flesh: she shall be called Woman, because she was taken out of Man.Therefore shall a man leave his father and his mother, and shall cleave unto his wife: and they shall be one flesh."
Genesis 2:22-24
Posted by Monica Fountain at 7:17 AM

I remember that pageant. That's a beautiful picture of you.

I was talking to a friend a few weeks ago, and we were trying to figure out who won Miss California. Thanks to Perez Hilton, Miss Runner-up has taken all of her thunder. The Word does say that He'll make your enemies your stepping stones, right?