What About the Homeless?

“…I tell you the truth, whatever you did for one of the least of these brothers of mine, you did for me.” Matthew 25:40 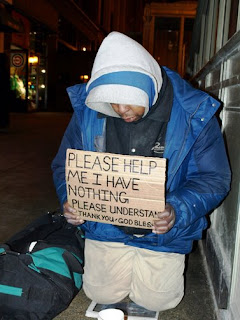 Recently I was walking in downtown Chicago. There’s nothing better than downtown Chicago on a summer’s evening. Beautiful flowers grace the median of Michigan Avenue. The sounds of a violin or the rapid beat of boys beating drums pierce the air. Most pedestrians stroll, enjoying the beauty of the last breath of summer.

But in the midst of the beauty of downtown Chicago, there is also the ugly reality of the homeless--men and women who carry their life’s possessions on their back. I don’t get to the city regularly so I forget how many homeless people spend their day begging along Michigan Avenue. Is it my imagination or are there more of them than there used to be? They come up and ask for money. I don’t want to reach in my purse to hunt for a few dollars in the middle of the street. Apologetically, I say sorry—feeling sad that I couldn’t help in some small way. Sometimes I try not to see them or make eye contact hoping that I won’t be faced with saying no. I resolve in my mind to remember to carry a few dollars in my pocket next time so that I’ll have something readily available or tell myself that I will make a donation to the Salvation Army or another charity that helps the homeless.

“Homeless man shouldn’t have gotten himself into that position,” her friend said.

And this is from a 13-year-old girl. But unfortunately children get those attitudes from adults. Instead of feeling compassion or a sense of “There but for the grace of God go I” too many of us have a condescending attitude. In spite of the bad choices people may make and the unfortunate circumstances that those decisions may place them, God calls us to help those in need. You might be living in a house in the suburbs today, but as the recent economic crisis has shown, many of us are just one paycheck, layoff or medical crisis away from being homeless. When we help the least of these it’s as if we are doing it for God.

My husband, John, a professor of journalism at Roosevelt University in downtown Chicago, had one of his journalism classes explore homelessness in Chicago during the spring of 2009. The multimedia project included photographs, videos, podcasts, articles and essays. The work that they produced is displayed at the web site, When the City Turns Cold.

John also wrote an essay about the homeless and his class project which appeared in the Chicago Tribune on July 12, 2009. Click here to read the article Now, I See, which also appeared on the web site Op Ed News.
Posted by Monica Fountain at 3:30 PM