A School That Works

The conversation usually goes the same way. Whenever I’m with a group of parents the question comes up. It may take different forms but it deals with the same dilemm 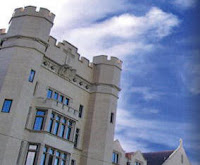 “Where’s your daughter going to high school?” they ask me. Or my question to them may be, “How is the high school?” if I know they have children attending a local high school.

Now the question even encompasses junior high school and even fourth grade as anxious parents ponder what school their child will attend and the school’s scores on national tests. The angst arises from the fear that many parents in my community have of what lies beyond the safety and success of our local elementary school to the horror stories that we have heard about the junior high and high schools in our south suburban school system.

You hear the stories about children being hijacked for their homework. Parents who have children who have graduated or who still attend the local high schools roll their eyes toward the heavens when you ask them about the high schools. Some assure you that this one is better than that one or if your child is in the gifted program, they will do just fine. If they’re an athlete they might have some insulation from the less than desirable elements. Others tell tales of children beating on desk and rapping while the teacher stands powerless before them. You hear about the parade of principals who have gone through the schools, low test scores, lack of discipline and even guns brought to school.

Some pay for private schools. This is an option that is less than desirable when I look at my property tax bill. Then there are other considerations. I suspect some of the parents who have decided to send their child to the nearby Catholic high school have made that decision as a way to get away from the black and brown children who have taken over the public schools rather than just seeking a better education. Will my brown babies really receive a good education in such an environment? We hear the horror stories of young black men who have been harassed and mistreated at the private school. Will my children as my husband says be “culturally” safe?

Our dilemma is not as severe as others. At least we can contemplate sending our child to a private school. And even with its shortcomings, our south suburban system's problems pale in comparison to the plethora of problems in many school districts, especially in urban communities, across this country where schools have failed and many just don’t work.

Given the dilemma, we contemplate driving our children to the West Side of Chicago to a school that works.

On the West Side of Chicago, Providence-St. Mel has been educating children for years and doing an incredible job. All of their graduates, 100 percent, go to college, many to top-tier colleges. St. Mel does this, not in the suburbs, but in the heart of the city. In a place where folks said green grass wouldn’t grow, St. Mel sits on a lush green lawn and raises black and brown children to reach academic heights.

Providence-St. Mel is my husband’s alma mater and it is a school that I would love for my own children to attend. 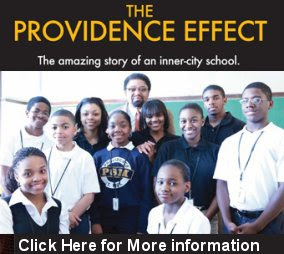 Here is an article that my husband John wrote about St. Mel and its impact that appears in the September 4, 2009 issue of the Chicago Sun-Times: Here by God's Grace and St. Mel's

A feature-length documentary titled “The Providence Effect” about the wonderful work done at St. Mel will be released in September in theaters across the country. To see a trailer of the movie, click here: The Providence Effect. A listing of theaters where the movie will be shown is also listed. On Sept. 25, it will open at the theater in Country Club Hills for my south suburban readers. It will also play in theaters in New York City, New Jersey, Los Angeles and Washington D.C.
Posted by Monica Fountain at 9:13 AM

"...children being hijacked for their homework." I done heard it all. And you talking about the kids rapping in class. Well, how about my son's 8th-grade teacher would rap to the students to get them to settle down? But, then again, there were a lot of things that went on at that school that made no sense to me.

As a parent who survived my children's high school years, I know your plight. I lived in the burbs throughout their middle school years, but I desperately wanted a change for their high school experience. So they ended up in an inner-city school--my girls, not my son. He would've turned that school upside down, and inside out--that was ranked by Time Magazine as one of the top 100 schools in the nation. You're doing your due diligence, and I'm sure you'll make the best choice for your daughter.

I hadn't heard about the movie that's coming out this weekend. I'll be sure to check it out.