The Ugly Side of Anonymity

When my father was growing up in Louisiana in the 1930s, the Ku Klux Klan would harass and hang black men. They wore their Klan cloaks to hide their faces and came in the night to do their damage. My grandfather told my father, “Real men sleep on sheets. They don’t wear them.”

Now in our technologically advanced days, people are still wearing sheets of anonymity to do damage. Only their cloak is anonymity on the Internet. They use this anonymity to spew hate-filled, nasty comments.

They are not interested in engaging in a meaningful, intellectual discussion. They just want to spout their often racist or hateful perspectives for the world to see, but they don’t want the world to see who they are. They are like a person who throws a brick through and window and then runs away or the Klansman who hides behind a mask and does his dirt in the dark. They are only interested in exercising their power to inflict damage. 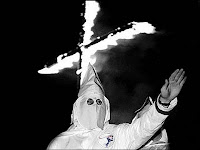 I have stopped reading the comments at the end of many stories, especially if it’s about President Obama or the First Lady. One web site allowed a comment to be posted in which the person called the president’s daughter a whore. Others allow commenters to call the First Lady a gorilla. During the campaign, some media sites had to take down the comment sections because they were so filled with racist, nasty, negative comments about Obama.

When my husband wrote an essay that was published in the Chicago Tribune about the homeless this summer, I was disappointed by all the mean-spirited comments directed at the homeless. People were not interested in dealing with the issue, but just wanted to put people down.

But it’s even worse when it becomes a matter of life and death. There have been online bullying cases where young people have committed suicide because of the abuse. Reputations have been ruined because of what some anonymous person posted for the world to see.

When you do not put your name on something you do not take ownership of the remarks and feel like you can say whatever you want to say with no repercussions. They say things they wouldn’t have the nerve to say in person because they have the cloak of anonymity. But there are repercussions, even if it is poisoning the atmosphere with your hate or negativity.

Anonymity has its place.

It’s important sometimes for people to be able to tell what’s going on with the assurance of anonymity in some situations. Whistleblowers have made a positive difference by coming forward. People who have something relevant to share but because of the delicate or embarrassing nature don’t want to use their names should have some anonymity. If someone witnesses a crime or knows of misconduct in a corporation or institution, they should have anonymity in some cases so that a greater good can happen or an evil can be stopped.

But anonymity should not be used for ugliness.

As a journalism student, I was taught to be very careful and wary of using anonymous sources. Are they reliable? Why do they need to be anonymous? Are they credible?

I had my own recent brush with the ugliness of anonymity.

I wrote a blog about reading baggie books to my son’s first grade class and mentioned that I was Time Magazine College Student of the Year. I received a response that there was no such award and the anonymous invective, “That’s a lie.”

Well, dear anonymous reader, should you happen to be reading this, in 1989 I was one of about 20 (not sure the exact number so don’t call me a lie) college students from around the country to receive the Time College Achievement Award. I shortened it to College Student of the Year in the blog because the point wasn’t about my accomplishments.

The point of the column was that if it had not been for my mother sitting at the table and taking time with me in first grade, all those later accomplishments would not have been possible. The point was that if we take the time to read and spend time with our children, we can make a difference.

If the person had cared to leave their name I could have clarified the matter personally. I could have even sent them a picture of the award or the full-page ad with my photo that ran in Time Magazine. But from the tone of their response they weren’t about that anyway.

It’s the same with the health care debate this summer. People aren’t really interested in clarification or having a civil conversation. Like Congressman Joe Wilson, they just throw rocks and say, “You lie.” Even though, they are the ones who don’t have all of their facts straight.
Posted by Monica Fountain at 9:00 AM

Well Monica, I just read your writing on the At The Well wall, and I as a close and dear friend, I KNOW BEYOND A SHADOW of DOUBT that YOU are NOT LYING!! I have known Mrs. Fountain for nearly 9 years and her reputation for being an honest woman, a great mother and a wonderful wife are TRUE!! Her writings NEVER attack anyone in a negative way but they do teach and uplift people in order to encourage them and have them move to the next level of a positive life through Jesus Christ!!
I personally take offense to the individual who decided to write such an offensive statement without fully researching and gaining knowledge of what Mrs. Fountain had written. This person clearly did not understand that Mrs. Fountain goal was not to draw attention to her accomplishments, but to address the issue of how her own mother's loving and nurturing allowed Mrs. Fountain to increase in her skills which she clearly is passing on to her children.
We are so quick to judge and be pessimistic instead of uplifting and celebrating each other.
I say Good Job Mrs. Fountain and keep spreading your positive message despite what other nay sayers spew out.