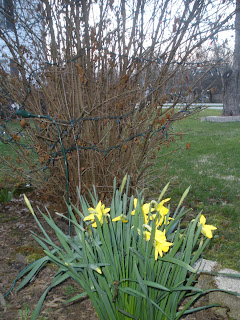 Outside my living room window two symbols of seasons have converged. Christmas lights and daffodils.

Christmas lights still adorn my bushes—reminders of the holidays and the season not so long ago when snow covered the grass and bushes and most of the trees were naked or wrapped in ice.

Now the yellow heads of the daffodils have poked out and bask in the sunlight. The trees are starting to bud. But my evergreen tree is still decked out with Christmas lights.

Now that the warmer days have come, one day I will take the time to unravel the lights from the bushes and put them in plastic bins until the season rolls around again. But for now I smile as I look out and see the lights and daffodils and contemplate their meaning
and who they represent.

Because the light of the world was born in Bethlehem, I can live again. I was dead in sin but I have life through Jesus Christ. Jesus makes dead things come alive. No matter what the season is in my life, I can see Christ and he makes all things new. He brings hope, life and light.

During the winter, the daffodils were there. They were just buried. It wasn’t their time yet.

In the fullness of time, God sent His son. For 30 years, he wasn’t in the spotlight. He lived in obscurity—a carpenter’s son from Nazareth. He died an inglorious death on a Roman cross. He was buried. He was dead.

But early Sunday morning, it was His season. He rose from the dead. He is alive and He brings eternal life to all who believe on Him. He is the light of the world and He is the way, the truth and the life. Christmas lights and daffodils.
Posted by Monica Fountain at 7:02 PM