From Freedom Riders to Flash Mobs 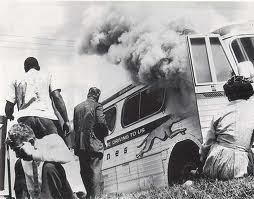 
From May until November 1961, more than 400 black and white Americans risked their lives—and many endured savage beatings and imprisonment—for simply traveling together on buses and trains as they journeyed through the Deep South.
Trained in the techniques of non-violence, the Freedom Riders challenged Jim Crow laws that called for the separation of blacks and whites by riding interstate buses through the South. The Freedom Riders met with bitter racism and mob violence along their journey. In Mississippi, the Freedom Riders were sent to prison.

On September 22, 1961 the Interstate Commerce Commission issued its order to end segregation in bus and rail stations that had been in place for generations. 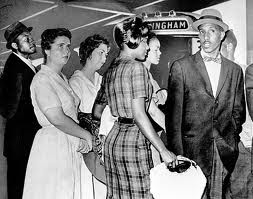 Last night, as I watched the documentary, The Freedom Riders, I was in awe of the courage of the young men and women of all races and religions who faced violence and death in the fight for civil rights for all Americans. I was proud of the strength and resolve of the men and women who faced death so that America could live up to its ideals. I felt gratitude for the sacrifice of people who faced beatings, violence and the very real possibility of death so that future generations would not have to suffer the indignities of segregation and racism.

But as I reflected on the images of the Freedom Riders and our forefathers who faced hate-filled violent mobs, I thought of the new mobs that threaten our young people today.

Now the images I see on the news are not Freedom Riders facing white mobs of hate, but flash mobs of young people beating innocent victims.

After watching the documentary last night, I turned to the news to see the mug shot of a young black man, the last to be sentenced in the beating death of 16-year-old Derrion Albert. Then the now familiar footage of Derrion’s tragic beating was shown. The beating death was captured on a cell phone two years ago when a fight broke out after school on Chicago’s South Side. The horrific footage of the honor roll student being beat to death caught the nation’s attention for a moment, even garnering a response from the White House which sent the Attorney General and Secretary of Education to Chicago.
The image of Derrion’s beating shows a mob not unlike those that attacked the Freedom Riders. It shows a wild frenzied group wielding wooden planks and stomping a young black man to death. But the perpetrators of the crime look like the victim—young, black, male. 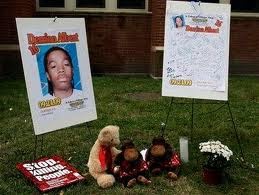 Lapoleon Colbert, 20, received 32 years in prison for the first-degree murder conviction. Colbert admitted to kicking Albert in the head and stomping on him while he lay on the ground
The Freedom Riders and others who fought for civil rights did not risk their lives and die for this.

I wonder what has happened in those 50 years where in some ways it seems we have gained so much politically and economically and yet lost so much spiritually and morally.

How did we get from Freedom Riders to flash mobs? Now instead of student coordinating committees organizing to fight racism and injustice, young people coordinate stealing and violent attacks via Facebook and texting. They push their elders to their death while trying to steal an iPhone and even sexually assault women who could be their grandmother. They mericilessly shoot pregnant women. Instead of being imprisoned unjustly for pursuing equal rights, young black men are imprisoned in downstate penitentiaries, usually for taking another young black man’s life.

Or have we given them too much? Or maybe we haven’t given them enough of what really matters.

Colbert appeared in front of Circuit Judge Nicholas Ford, who sentenced three other suspects in the Albert case to at least a quarter of a century as adults and ordered one suspect, as a juvenile, to remain imprisoned until he turned 21.

“We don’t do a good job raising these children,” the judge said, his voice rising to a shout, according to the Chicago Tribune. “They can slip away from us just as Lapoleon is going to slip away from his parents, and the way Derrion slipped from his.”

We need to do sit-ins again. But instead of sitting at lunch counters to desegregate we need to sit in our children’s classrooms so that the teachers can educate. The rides we need to take now are on the school buses with our children and we need to march around our schools, praying and then going inside the schools working with teachers and administrators to teach our children not only their ABCs but also their history and who they are.

We need to boycott rappers and other entertainers that promote criminal behavior, misogyny and plain old stupidity. We need to gather again in our churches but not just to be entertained by a dynamic sermon and great choir, but to pray, plan, strategize and be energized and mobilized to change our communities.

And perhaps most important, we need to parent our children. Not be their friends. Not buy them a bunch of stuff, but give them substance--love and discipline, care and consequences.

Then, like the Freedom Riders, will we change our communities and our country for the better.


Click below to read a powerful  and poignant column  from the Chicago Sun-Times by my husband, John W. Fountain about the need to revive Dr. King's dream.
Searching for Signs of King's Dream


Posted by Monica Fountain at 7:09 PM