Tending Our Gardens: What We Need to Have a Harvest

Listen! A farmer went out to sow his seed. As he was scattering the seed, some fell along the path, and the birds came and ate it up. Some fell on rocky places, where it did not have much soil. It sprang up quickly, because the soil was shallow. But when the sun came up, the plants were scorched, and they withered because they had no root. Other seed fell among thorns, which grew up and choked the plants, so that they did not bear grain. Still other seed fell on good soil. It came up, grew and produced a crop, multiplying thirty, sixty or even a hundred times. Then Jesus said, “He who has ears to hear, let him hear.” Mark 4:3-9 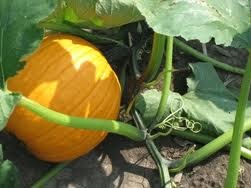 Last spring when we planted our garden, I planted pumpkin seeds at my son’s request. The pumpkin seeds eventually sprouted and grew into long vines that spread across the little garden. The vines produced big beautiful flowers but no pumpkins.

The vines looked lush and green. The flowers were beautiful, but there was no fruit. October came-- the time I should have been harvesting our pumpkins. But all I had was the memory of the flowers. No fruit.

That is how our spiritual life can be sometimes. Flowers, but no fruit. Over the years of gardening, I’ve learned a few things about producing a harvest and what we do naturally can also apply to how to produce spiritual fruit in our lives.

How we can produce fruit?

Hard soil—Hard soil may have been walked on. It’s compacted. Some folks’ hearts are so hard that the devil can just pick the word right off. The Word doesn’t penetrate.

Shallow soil (rocky)—In this case, there is a temporary response but no permanent change. Because of a shallow response, the person is not rooted and quickly falls away.

Good soil—It is this type of soil that produces a harvest. In good soil a seed has a chance to grow and produce fruit which contains more seed. A pumpkin can contain up to 700 seeds. Each of those seeds has the potential to produce a vine with as few as one and as many as six pumpkins which each have 100 to 700 seeds.

In order to have good soil, we have to weed out sin and fertilize our faith.

Pumpkins need at least six hours of direct sunlight. We need the sun to produce fruit.

The sun is the source of life. Earth’s proximity to the sun makes life possible. Through the process of photosynthesis, a plant grows and produces fruit. The plant turns the light from the sun and actually captures or absorbs the light from the sun into the chlorophyll in the plants cells. The sun takes the water and combines it with the CO2 in the air and transforms or converts it to sugar. The sugar is carried to other parts of the plant and oxygen is released into the air.

But not only is Jesus the sun, Jesus is also the seed. Jesus is the Word. In the beginning was the word and the word was with God and the Word was God.

Everything you need is in Jesus. He is the source of life. If you want to produce fruit, you have to be in the vine. He is the True Vine. We are the branches.

“If a man remains in me and I in him, he will bear much fruit; apart from me you can do nothing.” John 15:5

Want fruit? Get Jesus. Accept him as your Savior. Follow Him. Learn about him. Learn from him. Love him. Abide in him.

“If you remain in me and my words remain in you, ask whatever you wish, and it will be given you. This is to my Father’s glory, that you bear much fruit, showing yourselves to be my disciples.” John 15:7-8.


This series,"Tending Our Gardens," was adapted from message given at the City of Refuge Church International in Kankakee, Illinois in October 2010.
Posted by Monica Fountain at 9:34 AM