Deliverance in the Storm

"A furious squall came up, and the waves broke over the boat, so that it was nearly swamped. Jesus was in the stern, sleeping on a cushion. The disciples woke him and said to him, “Teacher, don’t you care if we drown?” He got up, rebuked the wind and said to the waves, “Quiet! Be still!” Then the wind died down and it was completely calm." Mark 4: 37-39 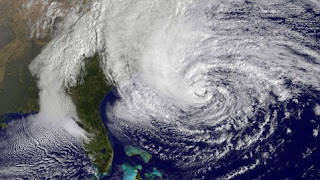 My son's class recently read a novel called "Hatchet" about a boy who survived a plane crash. In the novel, the boy is aboard a small aircraft on his way to visit his father in Canada. The pilot of the plane has a heart attack and the plane lands in a lake in the Canadian wilderness. The boy survives and learns to live off the land. He makes himself a shelter, learns how to start a fire, hunt and store his food.

Spoiler Alert: Toward the end of the novel, a violent tornado comes through and tears apart everything that the boy has assembled. But what the tornado also does is bring the crashed plane to the surface of the lake. When the plane re-surfaces, the boy is able to get back in the plane (which includes the dead pilot's body) and get the survival kit out which includes an emergency transmitter. The emergency transmitter sends a signal out that leads to the boy's rescue.

The boy had become comfortable surviving in his situation and at first glance, the storm seemd like a catastrophe, but it set up the situation for his deliverance.

Storms, like Superstorm Sandy and Hurricane Katrina, can be violent and destructive. Storms are scary. Storms disrupt and dismantle. Storms are uncomfortable. But storms are inevitable--in the natural and in the spiritual.

Storms in our lives can be painful and uncomfortable. Deadly and destructive. We can have stormy situations in our relationships, finances, careers and health. Divorce, disease, addictions, accidents, disasters, bad choices and undeserved actions of others that deeply hurt us can cause the winds to whip, lightning to flash and flood waters to rise in our lives.

The saying goes that either you're going through a storm, coming out of a storm or about to enter a storm.

God may be using your storm to uproot and bring to the surface some dead stuff that you need to go back to explore so that you can get what you need to not only survive but be rescued, delivered and set free. You're surviving and making it and you've learned a lot of lessons in the wilderness, just like the boy in the book. But the time may have come when God is saying, "You've been in the wilderness, a place of solitude. You've learned some lessons. But now it's time to come out. You've got places to go and things to do and if I didn't send this storm and disrupt some things and get you out of your comfort zone, you would never reach your destination/destiny."

In the storms of life, God reveals his power to us in new ways. You may feel like the disciples in the boat during the storm, saying "Jesus, don't you even care." But Jesus is right with you, in your storm and he can speak "Peace, be still" and your inner storm will cease and he will give you peace, even if the storm outside is still raging.

He'll take us by the hand and we'll walk on water. There's a miracle in the midst of the storm. We'll do the impossible as long as we keep our eyes on him.

Posted by Monica Fountain at 8:07 PM