Don't you realize that in a race everyone runs, but only one person gets the prize? So run to win! 1 Corinthians 9:24 (New Living Translation)

Have you ever seen the cartoon Road Runner? In episode after episode Wile E. Coyote tries to trap and destroy the Road Runner. The Road Runner is just going along minding his own business. Doing his thing. The Coyote has elaborate plots and schemes(often aided by the Acme Corporation) to blow up, trap and destroy the road runner. But every time, the trap ends up blowing up in the coyote's face. The Road Runner goes on about his merry way, speeding by with a "beep, beep!", oblivious to the trap that was set before him. 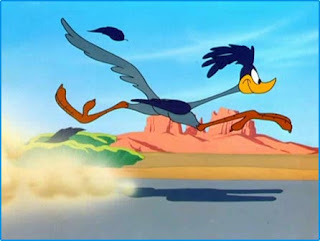 That's how it is with us. Our Enemy, that wily Devil who goes about like a roaring lion, seeking whom he may devour, has set a trap for us. He wants to steal, kill and destroy and he's willing to use whatever tools are at his disposal to catch us, delay us, deny us, destroy us and keep us from our divine destiny in Christ. He will use people, circumstances and situations to deceive, discourage and disqualify us from running our race.

But like the Road Runner, we don't have to worry. No weapon formed against us will prosper. It doesn't mean that the fiery darts and arrows won't hurt us, discourage us or even delay us. But we already have the victory through Christ Jesus.

The attack and plan of the Enemy will blow up in his face and we'll be going right along like the Road Runner. Say"Beep, beep" , get out of my way. I'm on the road fulfilling my purpose going to my divine destiny and keep it moving. Don't give up. Stay in the race. Keep the course that God has given you.You've already got the victory if you don't quit.
Posted by Monica Fountain at 11:50 AM