Lip Gloss, Hot Sauce and a Father's Loving Thoughts: An Open Letter to a Daughter


The following is an excerpt from, Dear Dad, Reflections on Fatherhood. 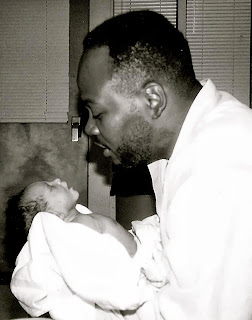 
n a snowy Virginia morning that November when the flakes were falling like white feathers from the blue sky, your mother lay on the sofa in our living room, the pains of early labor coming and going as I stood with a stopwatch, looking more like a nervous coach than an expectant father, making notes each time. And we knew: It was time. Music filled the room—Bobby Lyle’s “Christmas Song”—the sound of soft piano filling the spaces in between your mother’s moans from her contractions. And we knew: It was time.


For months, we had been awaiting your arrival. I had painted your bedroom a soft powder blue, bought a giant stuffed bear, and assembled your crib. We had decorated your room with an assortment of stuffed animals and knickknacks and all the accessories for a new baby, including a changing table laden with Pampers and powder. We had even picked out a name: Imani. It was for me a special name. It is Swahili for the word “faith.”


I needed faith. Years earlier, I had lost it. It is the kind of thing that sometimes happens to people on the road of life from childhood to adulthood, and even along the road from adulthood to the twilight years of life when we all eventually turn aged and gray and the light of life slowly dims in our eyes. Someone said life is what happens while you’re making other plans. And I guess life happened to me. I became a teenage parent. Soon after, I was married with three children, then eventually divorced. I had known poverty as a child, then poverty as an adult. And I had scars from having grown up as a little boy without my natural father. They were not physical scars, the kind that you can rub, touch, soothe, and fade with creams and Vaseline and cocoa butter. But they were scars no less—emotional scars, the kind of scars that do not so easily fade. The scars of rejection. Scars of disappointment. Of fear and hopelessness. I’m talking about the kinds of scars that I never want you to have because of a father’s unwillingness to be in your life. So just as we adults sometimes suffer scars as we stumble along the road of life, there are times when we must also find faith if we are to find hope for healing. And that’s where you come in.


Truth is, after being a single parent, after years of disappointment as a father myself and the years of disappointment from early childhood as a son, along with all the pressures and challenges of life, I didn’t want to have any more children. Not even half of one. Well, that was a bit of a problem, for I had remarried, and the lovely young woman whom I married didn’t have any biological children. But I had written her a promise on a napkin at the Denny’s restaurant on North Harlem Avenue in Oak Park, Illinois, where we often ate French toast and bacon and eggs when we were just engaged. That promise was that someday, when we were both ready, I would be willing to have a child. That day came. And we planned for you, though we could not have known it would be you or how you would look when you were born, how you would sound someday when you spoke your first words, what your personality might be, or whether you might dislike oatmeal, like your dad, or like the color purple, like your mom. This much we did know: That you would be our little girl. Daddy’s little girl. And that alone made you special.


So you needed a special name. Of all the names we considered— Nia, Monique, Sha-nay-nay (just kidding, smile)—there was one that seemed perfect. One that captured my hopes for a yet unborn daughter, one that also reflected my decision to try and move beyond the hurts of my own past and to move forward into a future of a brighter tomorrow. That name was Imani.


So we whispered it. From your mom’s and my lips to her round belly, from the time after the ultrasound pictures at the doctor’s office first showed that the baby she was carrying was a girl, we called you by your name. For months, we called you, sang to you, and dreamed of the day when you would finally be here and we could see your face, hold you, care for you. I even made up a song that I would sing sometimes to your mother’s womb and that I would sing to you after you were born as I cradled you in my arms:


I can hardly wait to see your face


You are precious, that is why


On that morning of November 15, 1995, as the snow fell, and the pains came, and the breath of winter hung in the Virginia air, we knew: It was time.

Shortly after 6:30 p.m. that Wednesday evening, I watched as your mom gave her final push in the room at Alexandria Hospital, and your wet, black, straight hair slicked to your head finally poked through fully into the light of life. I watched as they suctioned you and you took your first breath and cried. I cried, too, at the sight of you, perfect, beautiful, our daughter, my daughter. And every hope I ever had for you, every expectation, every joy a father could ever find in a daughter, I found in you that day, in that moment, in that room.
This article appears in The Well Magazine Spring 2013 Issue.
To download the magazine for only $1.99, click the cover. 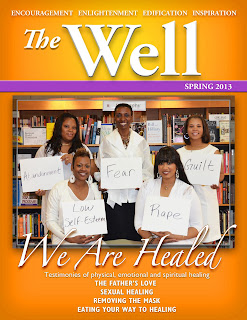 Posted by Monica Fountain at 4:56 AM