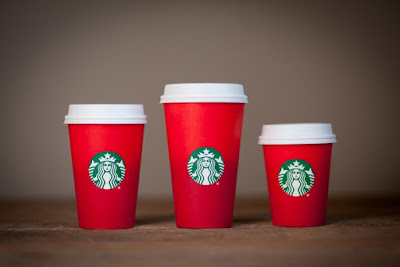 I hear that some Christians are upset that Starbucks cups are red. The ubiquitous café has chosen a simple red cup for the holiday months. Apparently some Christians feel Starbucks has declared “war on Christmas” because their holiday cups usually have a snowflake or some other holiday symbol on the cup.

These Christians reportedly are "seeing red" (becoming very angry) over Starbucks cups. I read one post where it said that Christians were encouraged to say that their name is Merry Christmas so the barista will have to say the abolished words when they fix their drink.

I hear Republican presidential candidate Donald Trump has even weighed in on the matter, suggesting a Starbucks boycott and if he became president everyone will be saying “Merry Christmas” at every Starbucks.

Personally, I find the cups festive and appealing in their simplicity. The cups are red and the Starbucks emblem is green and white. Looks like Christmas colors to me. But I guess beauty is in the eye of the beholder.

First, the Starbucks cups never had “Merry Christmas” emblazoned across them or a Nativity scene. They had “symbols of the season” such as reindeer and ornaments. Who can tell me what was on the cup last year? I have no idea and don’t care. Second, Starbucks is not Chick-fil-A. It does not claim to be a “Christian” company. It is a company where you can buy coffee. In a red cup. A company you can choose not to patronize. Third....really?

I wish the same "Christians" who are "seeing red" about Starbucks cups would see red—the color of Tyshawn Lee’s blood that flowed in an alley on the South Side when he was executed. I wish those same people who are so worried about the red of Starbuck’s cups would see red about the blood of other children, mothers, fathers, grandmothers and grandfathers that flow in our streets, schools, movie theaters because of senseless gun violence.

I wish that instead of lying and saying their name is Merry Christmas that they would see the barista serving them. A single mother with a sick child trying to make ends meet. A middle-aged woman who feels stuck in a dead-end job. A college student trying to pay tuition. I wish they would speak the love and truth of Christ instead of a lie about their name. That they would be Christ hands and feet to that person. Show an interest in their story. Perhaps lend them a helping hand or say a prayer.

I pray that they see Christmas is about celebrating Christ, not worrying about cups. That being like Christ would have a far greater impact in the world than a snowflake on a coffee cup that will soon be filling a landfill.

Hopefully, they will see that we will live in a country where you can say "Merry Christmas" and read your bible in Starbucks and even have a bible study there if you want without the police arresting you for having a bible or throwing you in jail and torturing you for proclaiming the name of Jesus, which is the case in many places in this world.

Hopefully, instead of seeing red about the color of a cup, they will see how silly all of this is in the whole scheme of things. They will see that a company can’t kill Christmas for those who really know what it’s all about—the Christ.

Whenever I look at the Starbucks cup this season, I will see red.

I will see the red blood of Jesus that takes away the sins of the world. We really don’t even know the exact date when Jesus was born. But we know that he was born. He died and he rose again. That the red blood that He shed covers our sins.

That's the red I will see and celebrate.
Posted by Monica Fountain at 9:48 AM

Very well said Monica, I love this article. We the people are always focusing on the wrong thing, which shows that human life means nothing, especially black life.