Removing the Mask and Facing the Mirror 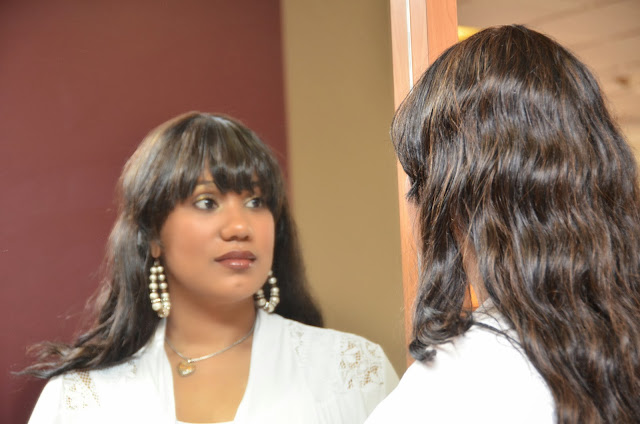 Mirror, Mirror, on the wall, who's the fairest of them all? Surely it cannot be me, because if I was those men wouldn't have raped me.


This revision from a line made familiar by the Disney movie Snow White, became the statement that I made to myself as I realized that I was a rape survivor. A survivor of rape.  A girl who was raped. No matter how you say it, the sting of the reality of what happened to me did not get any softer. How did this happen? Better yet, how did this happen to me? At the mere age of 17, I was reflecting that there was something very different about me.


I was now a rape survivor.


Raised in a single parent home, I was the baby girl of a family of five. I was very much loved by my family and neighbors, some would even say spoiled. I was protected, supported, and given every opportunity in the world to pursue all of my dreams.  I was the shadow to my older brothers and sisters. I cherished times with my grandparents and my mom and grandmothers were my heroes. My dad and grandfathers were the coolest people I knew.


But guess what? It did.


Raped in the back of a record shop. Raped two apartments from my own home. Raped in my boyfriend’s home at a party by his roommates.  Am I cursed? Is God mad at me? This clearly cannot be what life is supposed to be.


So I hid behind a mask. Not a physical mask, but an emotional and spiritual mask. I smiled during the day and I plotted at night. I plotted how to get back at the men that did this to me. That scarred me. That hurt me. During the day, in the public I was one person, but privately I was a different person. I had to be. I had to protect myself from something so heinous and tragic ever happening again. One way one minute and another in the next, but the juggling began to make me tired and confused.  My moods and personalities began to switch at the wrong times in front of the wrong people. The mask became too heavy. I just wanted it all to end. And so I tried to end it.


I figured the only way to stop the pain was to end my life. So when the overdosing of pills didn’t work and the alcohol poisoning just gave me an upset stomach and a major headache I figured driving my car off the road or standing in the middle of the street would work.


But I was left with nothing but a flat tire or a car blowing at me, with the driver screaming at me to get out of the street. My tears of frustration turned to laughter.


The night of my third rape, a gang rape by my boyfriend’s roommates, I heard a voice. As I lay on the side of street praying that somehow I could disappear down the sewer like my tears and the water. I heard, “You lived through it.”


When I first heard these words on the night of the most pain and fear I had experienced in my life, I thought God was mocking me, taunting me even. But as I stood in the middle of the street with cars swerving around me, it served as a reminder, a light, a guide, that although these events could have killed me, they didn’t. I lived through it. I was on the other side of the tragedy. The worst part had already occurred. So I laughed my way back home, where I found my mom sitting with her friends studying Experiencing God. Interesting, I thought. As they were reading how to experience God, I had just experienced him first hand.


My failed suicide attempts were a major sign for me. I did not create myself and so I could not determine when my life was going to end.


“You lived through it” became my mantra, my motto, and my platform to stand on as a reminder that so many people had died at the hands of their attackers, or even the weight of the tragedy had socially, mentally, emotionally, or spiritually killed so many others. But somehow I lived through it. And because I lived through it, I had to help others live through it.


Being a sexual assault advocate was never something that was on my wish list or to do list, but neither was being a victim of such a crime.  I remember so clearly my thoughts, my fears, my pain, so I knew that there must be others that were experiencing the same pain, and I did not want them to have to experience it at all and definitely not alone.


Advocacy became my tool to help others to remove their masks. I wanted to help them to recognize their Mistakes, their Assumptions, their Scars, and the Knowledge of their true self. The fact that they were survivors of sexual assault will never change, but how they lived their lives afterwards could change.


For years, I was terrified of men. I despised them, didn’t trust them. I vowed never to let another man get close to me again. I felt misunderstood by women, for the few that knew judged, misunderstood or just avoided me altogether. So I hid. I hid the realities of what happened to me and how it affected me. I did not want to live in this big world all alone. But I realized that by hiding it, I was hiding me.  No, this tragedy did not define me, but it was a part of me, and it will forever be, but I had to remove the mask and look in the mirror and accept it. Then reflect it. Reflect its reality to others.


Sexual assault is the most underreported crime in the world. That meant, like me, thousands, even millions, of girls, boys, women and men, had been silenced for years. My decision to move from the mask to the mirror was because my silence was growing loud. So I shattered the silence and became a voice through such phenomenal organizations like PAVE (Promoting Awareness, Victim Empowerment), GEMS (Girls Educational Mentoring Services) and AWAKEN, INC. I raise my voice to erase ignorance of the realities of rape, to educate families and communities, to eradicate the injustices in this world, and most importantly to empower the victims.


As I now stand almost 20 years later, from situations that I thought there was no recovery, I have had an opportunity to travel around the country, sharing a message of hope and light to help others know that they can remove their mask and embrace their beautiful reflections in the mirror. I was able to  see myself when I received a new perspective on who God is. For I can only see me, when I see Him. I know that there is no such thing as a coincidence and that He made me with purpose, for purpose, and on purpose.


How that purpose is revealed has to sometimes go through tough situations. I look at it like this: every seed must go through dirt to become a flower. So my sexual assault experience was a part of the “dirt.” Although it was dirty, uncomfortable, and caused pain, there were “nutrients” in that experience that helped me to grow and to develop and to blossom. So by removing my mask, I can see the dirt, and where it is and be honest about  how it made (makes) me feel.  At the same time, removing the mask, allows me to see fully in the mirror that I lived through it.


I have taken my mask off. How about you? Your mirror is waiting. 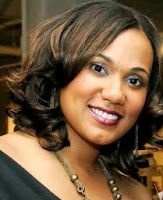 To read this story and other powerful testimonies of healing, download this issue of The Well Magazine for only $1.99.
Read on your iPhone, iPad or computer.
Just click on the cover. 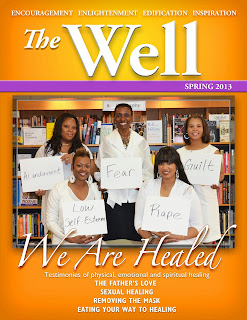 Posted by Monica Fountain at 9:36 AM

Awesome and brave! We who have been made survivors and tried to take our lives should continue to be the light and the salt Our Almighty Father has commanded us to be.
I have shared my story with my husband and daughter (and others). I especially do not want our daughter to be a victim because of placing herself in a risky situation, such as I have (especially using drugs and alcohol), and what happened at your "boyfriend's" party.

Claim the victory instead of being the victim knowing that His death and Resurrection were not in vain.
Stay strong in the Lord and continued blessing and you continue to serve and be a blessing!
Romans 12:1-2
--Eugenia