“For you have heard my vows, O God; you have given me the heritage of those who fear your name.” Psalm 61:5 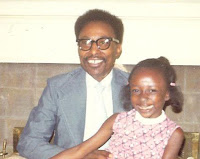 As a child, I often heard my father’s gravelly baritone throughout the house.
“Guide me, O Thou, Great Jehovah, pilgrim through this barren land.”
On Sunday mornings as he was getting ready for church or during the week as he was going about his day, a song would swell up in him and just bubble out.
“I am weak but though art mighty, hold me with Thou powerful hand.”
As a child, I really couldn’t appreciate what I considered his “old-fashioned” singing or even understand why he would be singing or how a song could grow inside of you to the point that it erupted from your soul in an explosion of praise and worship.
As an adult, I am so grateful for the spiritual heritage that my parents passed down to me, from the “old-fashioned” songs that now resonate in my soul to the living example lived out every day before me of what it meant to love God and His people.
A heritage is something that is passed down from preceding generations.
I thank God that my parents passed down to me not only sayings that I now find myself repeating to my own children, but that they also lived a life that I could emulate.
“God gave you some sense,” my mother would say. Now I hear myself repeating those words.
I saw my mother feed the hungry, visit the sick in the hospital and the elderly in the nursing home. I saw her care for the less fortunate, even bringing folks in from the street and fixing them breakfast. She has given away money, clothes, food or whatever anyone has needed. I saw her be a mother to so many others.
“If you can’t say Amen, at least look Amen.”
I heard my father say many a Sunday morning as he stood in the pulpit to preach. Now when I speak I find myself saying those same words sometimes.
I saw my father be a voice for the powerless and fight injustice wherever he found it. He preached every Sunday, but that was only a small part of what he did. He counseled couples and wayward teens. He married and buried, comforted and challenged. He arose from his bed in the middle of the night to help a family cope with tragedy. He was a father to so many.
There are so many other things that I could say but there is not enough time and space to say all that I received from my parents and others, some who have gone on to be with the Lord. But I am so grateful that even though they have left us physically—Mother Green, Grandmother Hagler, Aunt Marjorie, Elder Davis, Rev. Bond—that their spiritual heritage remains.
Now I sing throughout my house, even louder than my father. My kids must think I’m crazy as I am going through my day, washing dishes or whatever, and just break out in a song.
“If the Lord, never did anything else for me, He’s done enough.”
But I hope that I am leaving them a heritage not just by what I say or sing, but what I do every day, that one day they will pass on to their children.
Posted by Monica Fountain at 7:02 AM

You mean to tell me your dad used to sing that song at home too? I'm surprised you're not still singing it in your sleep.

Like you, I find myself repeating the words and behaviors of Rev. and Mrs. Copeland. I thought your mama was mean (or crazy – LOL) when she would show up at the school on registration day to act as the surrogate mother for all the children and demand that our schedules be changed because we weren't given or encouraged to take college-prep courses at the same rate as our white counterparts. And what about the time that crazy gym teacher gave you a "B"?

Yeah, I thought she was mean then, but I found myself acting the same way with my kids and their friends. I was everybody’s mama. And if their parents couldn't make it to the school conference, I was already there to speak up and out.

Because of your parents' obedience to God and genuine love for people and their community, they now have many spiritual sons and daughters who now carry the torch, and are thankful for the spiritual heritage they've left us.